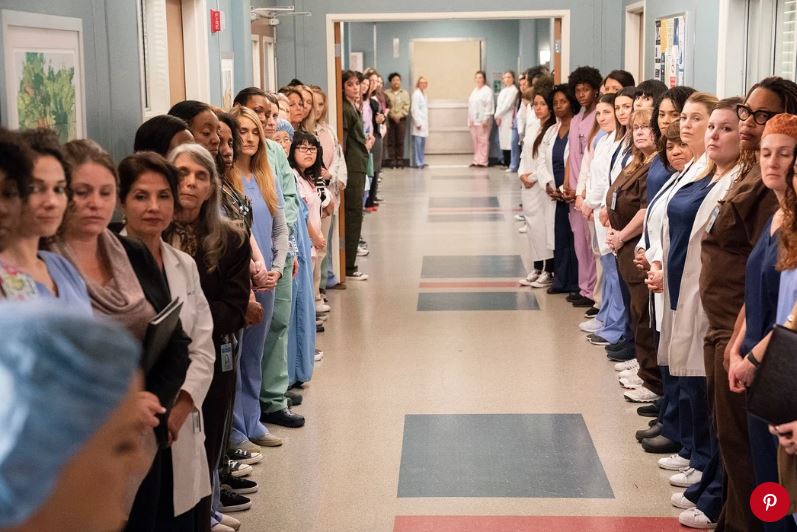 I’m a sap, I admit it. I’m a very sentimental person and can cry at the drop of a dime. Anything that has a twinge of emotion, the wells of my eyes fill up. While I watched tv, last night was no different. Shonda Rhimes is a genius. Allow me to explain.

March is International Women’s Month and the women over at Shondaland, and more specifically the women on Grey’s Anatomy, are some power houses. I mean you have Shonda Rhimes, Ellen Pompeo, Debbie Allen, Chandra Wilson, Camilla Luddington, Caterina Scorsone, Kim Raver and Kelly McCreary, who only make up the main characters. Over the years these women, like many others, have stood up and used their platforms to speak out against injustices – not just against women but against humanity as a whole. I love how Shonda weaves real life into her story lines. I equally love how she shares the wealth with her team and allows them to flourish by empowering them to do more behind the scenes.

On last night’s episode, “Silent All These Years”,  Grey’s honors the strength of women and the polarizing effects of guilt. In a time when women are owning their power and speaking up, out and against sexual abuse and assault, this episode further supports women who are or have been victims by reaffirming that, “It’s Not My Fault”.

In what were a sequence of purely awe-inspired moments, a woman entered the hospital in shock and seemingly had tunnel vision. Thought to have been abused by her spouse, we find out that she had been raped and was going through the internal process, idling at guilt. Quickly, she established a rapport with Jo (Camilla Luddington) and would not allow her to leave her side. This woman, Abby, could not and did not want to have a rape kit completed because she knew it would just sit in the back of some evidence locker. She didn’t want to call her husband because she feared he would look at her differently or think she was lying. She feared even seeing a man’s face. All things which are widely known to happen in these situations. The very thought of seeing a man’s face intensely heightened the fear she had of seeing/recalling her assailant’s face. So Jo pretty much put out a call for any women, on staff, who could get away to come down to this particular area and line the path where Abby would have to travel to get to surgery, with their faces, unbeknownst to her. As her all female team of doctors rolled her out of triage, the gathering of women parted like the sea and split to either side of the hall creating what would be this trail of strength, power and support that she needed before heading to surgery. During her attack, Abby’s organs had been pushed up and were lodged in or near her diaphragm as a result of her horrifically brutal rape. That scene alone was nothing but pure genius. It was more powerful than I think even they realized. It sent a message that when we, as women, support one another there is nothing we can’t get through or do. It literally sent chills across my body. I can’t remember the last time I saw anything this powerful … just one action, in one moment, for one woman. Absolutely amazing. I tip my proverbial hat to the cast and crew.

And if that wasn’t enough, there was another equally important scene, for me at least, because it involved a black man having a meaningful and tangible conversation with his black son about a simple word: “No!” Jason George who plays Dr/Fireman Ben Warren is the step father to pre-teen Tuck, played by BJ Tanner. The mere fact this even happened on prime time television is beautiful. Not that this scene had anything remotely to do with the aforementioned scene. In fact it was completely separate, but true to the overall and overarching theme of the episode, #TimesUp.

Earlier in the episode, we find out that Tuck has a “friend” and he’s going to a “thing” with her. Miranda, his mother played by Chandra Wilson, like most moms, is not ready for him to grow up. It almost seems like it happened over night. At least that’s how we all feel, right? Tuck has his parents drop him off about a block from school to where he runs across the street and places his arm around a young lady. Seeing Tuck do this, Miranda realizes that a conversation needs to be had and quite frankly she’s not ready. Fast forward to a little later in the day, Ben and Miranda are talking about “the talk” that needs to happen when he says he can have it with Tuck. His father had the talk with him and he felt he could do it. We next see Ben and Tuck having dinner at a diner. Ben is trying to relate to Tuck by using metaphors relating to sports. He tells him how when you’re on a team and when a time out is called … everything stops … Everything. He then tries a couple of other ways to communicate the same premise until Tuck says he’s got it and he thought they were just having burgers. Ben tells him, well I thought talking was just talking, but both you and I know that’s not the same thing anymore. It was brilliant. And my eyes welled up again.

This was a crucial and timely episode. It hit home for me on a few notes. It’s so important that we:

We’ve gotten so far away from face to face communication that it leaves a huge gap in our personal relationships. We have to stop. We must make time. It’s imperative to our sense of humanity.

If you’ve not seen this episode, I strongly urge you to do so, even of you are not a fan of Grey’s. Trust me, you’ll thank me later.

And this, my friends, are my thoughts on “Silent All These Years” Season 15, Episode 19 on Grey’s Anatomy.

If you or anyone you know needs help or support after facing an assault, please call: